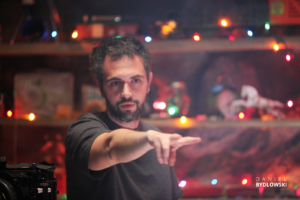 The success of the film led to his master degree at the University of Southern California, where he had the opportunity to work with great directors and researchers such as Mark Jonathan Harris and Marsha Kinder, developing projects that were not only shown on the big screen, but also in museums.

Always attempting to bring awareness to social issues, Daniel developed the film “Bullies,” a film that provides a safe space for those who suffer bullying to deal with the trauma. The film won awards in several festivals and was one of the highlights of Comic-Con San Diego and Cleveland International film festival.

Daniel is currently doing his PhD at the University of California, Santa Barbara, where he focuses on new media and virtual reality as the future of cinema. He judges and reviews films for international film festivals and researches new media, such as virtual reality.